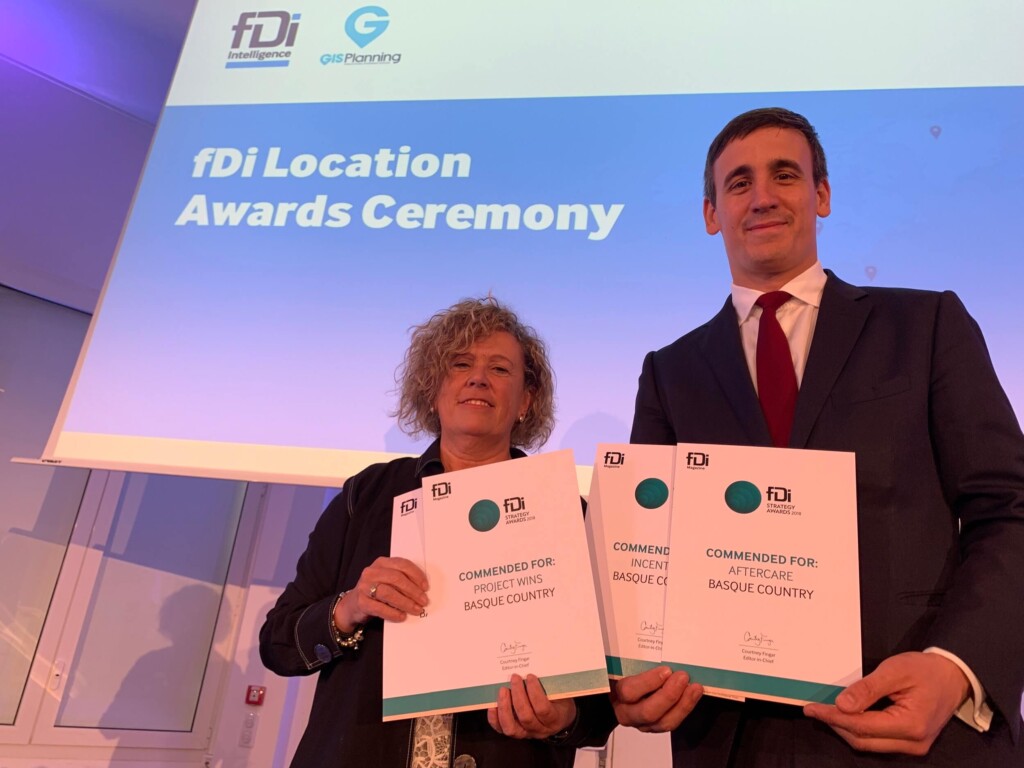 Alex Arriola, SPRI Group General Manager, today collected the award given in Cannes by the fDi Intelligence Magazine, part of the Financial Times Group, recognising once again that the Basque Country is an attractive territory for foreign investment. On this occasion, four aspects of the Invest in the Basque Country strategy of the SPRI Group and the Basque Government have received awards. More specifically, these are support for established companies, the public-private Bind 4.0 acceleration programme for start-ups, the incentive systems, and one of the projects for attracting foreign investment into the Basque Country, like that of the American company Viralgen.

Like this, the Basque Country has been recognised by the fDi Magazine, which specialises in market positioning and international investment flows, from among 112 worldwide locations. As indicated, the report on the Strategy Awards highlights the Basque Country for its “Aftercare” support strategy for foreign capital companies already installed in the Basque Country, in its strategy aimed at SMEs and start-ups, of which the Bind 4.0 programme stands out, in incentives for setting up, and in the section of high interest projects achieved, such as the largest gene therapy production centre in Europe with the American capital company, Viralgen.

In the Basque Country, there are currently over 1,000 companies with foreign capital that have more than 10 employees, representing 10% of the total companies and providing more than 52,000 jobs. Industry brings together almost 46% of the foreign investment companies and their average size is bigger than the average. In 2015, these companies contributed more than 13% to the GDP and represented 9.9% of employment in the 2008-2015 period.

On the other hand, the Basque industrial policy has a special impact on SMEs and the creation of start-ups. Therefore, the Bind 4.0 acceleration programme, launched by the Basque Government three years ago and run by SPRI, has been awarded as a project of interest for its impact also on attracting foreign investment. Proof of this is that in the last edition, it received 524 applications from 64 different countries. These applications have been analysed by 40 Basque driver companies, which have selected 32 start-ups, with which a total of 44 projects will be developed. Of these 32 companies, 13 are from outside the Basque Country and 5 of them are foreign.