Ultra-long, one-dimensional carbon chains are synthesised for the first time

Elemental carbon appears in many different forms, some of which are very well-known and have been thoroughly studied: diamond, graphite, graphene, fullerenes, nanotubes and carbyne. Within this “carbon family”, carbyne (a truly one-dimensional carbon structure) is the only one that has not been synthesised until now, despite having been studied for more than 50 years. Organic chemists across the world had been trying to synthesise increasingly longer carbyne chains by using stabilizing agents; the longest chain obtained so far (achieved in 2010) was 44 carbon atoms.

A research group at the University of Vienna, led by Prof Thomas Pichler, has presented a new, simple means for stabilising carbon chains with a record-breaking length of over 6,400 carbon atoms. They have thus broken the previous record by more than two orders of magnitude. To do this, they used the confined space inside a double-walled carbon nanotube as a nano-reactor to make the ultra-long carbon chains grow and also to provide the chains with great stability. This stability is tremendously important for future applications.

The existence has been confirmed
The work carried out in collaboration with various highly prominent research groups worldwide, including the UPV/EHU’s Nano-Bio Spectroscopy research Group led by Prof Angel Rubio , has unambiguously confirmed the existence of these chains by means of structural and optical probes. The researchers have presented their study in the latest edition of the prestigious Nature Materials journal. According to the researchers, the direct experimental proof of the confined, ultra-long carbon chains, which are two orders of magnitude longer than the previously proven ones, can be seen as a promising step towards the final objective to obtain perfectly linear carbon chains. 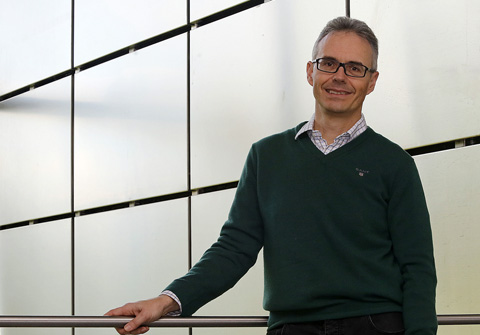 Theoretical studies have shown that after having made these linear chains grow inside the carbon nanotube, the hybrid system could have a metallic nature due to the load transfer from the carbon nanotubes towards the chain, although both the nanotube and the chain are vacuum semi-conductors. So it is possible to control the electronic properties of this hybrid system. Therefore, this new system is not only interesting from the chemical point of view, it could also be very important in the field of nano devices.

According to theoretical models, carbyne has mechanical properties that are unmatched by any known material, as it even outperforms the mechanical resistance and flexibility properties of graphene and diamond. Furthermore, its electronic properties are pointing towards new nano-electronic applications, such as in the development of new magnetic semiconductors, high power density batteries, or in quantum spin transport electronics (spintronics). However, the researchers point out that to do this it would be necessary to extract these ultra-long, linear carbon chains from the double-walled nanotube containing them and stabilise them in some liquid environment.

Additional information
The research was carried out in collaboration with various research groups at different organisations: University of Vienna, AIST (Japan), ETH Zürich, Nano-bio Spectroscopy Group (UPV/EHU) and the Max Planck Institute for the Structure and Dynamics of Matter (Hamburg).

The Nano-bio Spectroscopy research Group is led by Ángel Rubio, a UPV/EHU professor, a member of the Department of Materials Sciences, and director of the Theory Department of the Max Planck Institute for the Structure and Dynamics of Matter. The group’s activity focusses on the theoretical research and modelling of electronic and structural properties of condensed matter as well as the development of new theoretical tools and computer codes to explore the electronic response of solids and nanostructures when handling external electromagnetic fields.