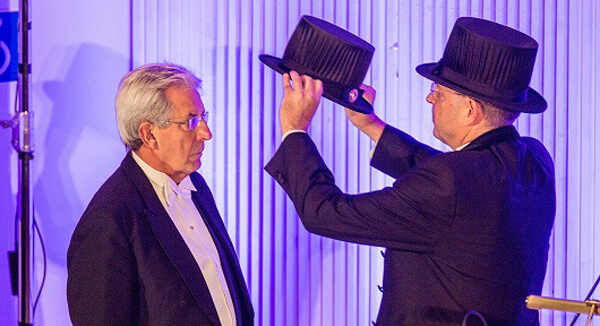 Pedro Miguel Echenique, Professor of the University of the Basque Country (UPV/EHU) and President of the Donostia International Physics Center (DIPC), has been invested Doctor Honoris Causa in Technology at a ceremony held today at the prestigious Aalto University in Finland. This distinction, which has been conferred every two years over the last 80 years by the Aalto University Schools of Technology, has been awarded to 10 eminent personalities from the world of science, technology and society, in addition to Professor Echenique.

The scientific and cultural work of Professor Echenique was highlighted in his nomination, as well as the contribution he has made over the past three decades to boost cooperation between Aalto University and the University of the Basque Country, mainly concerning exchanges in the field of scientific and technological research. Pedro Miguel Echenique has acknowledged that he feels very honoured and proud of this distinction, because it involves recognition not only of his career, but especially of the scientific values and the great work performed by the UPV/EHU. In the same way, it recognizes the enormous technological potential of cutting-edge basic research. Thanks to this, there is close collaboration between Aalto University and the UPV/EHU today. Echenique stated that he felt grateful and honoured to have been accompanied at the solemn ceremony by Iñaki Goirizelaia, Dean of the University of the Basque Country, and by Fernando Plazaola, Vice-Chancellor for Research, who was one of the first Fellows of the programme promoted by the first Basque Government, precisely at the Helsinki University of Technology.

Aalto University is considered one of the five “Rising Stars”, according to a study published recently by the Massachusetts Institute of Technology (MIT) about the world’s leading 200 universities. The Finnish University is renowned for promoting the culture of entrepreneurship, an initiative that has been backed by government ministries and the Finnish Funding Agency for Innovation.

Professor Echenique was selected from among the 11 award winners to make the speech of honour. In it, he used the poem of the famous Basque novelist (with “v” although it probably deserves a “b” in the words of Echenique) Bernardo Atxaga to celebrate “the friendship and good times that should never end” to express his feelings upon receiving the award. He stated that for him the word future means “science and research” and that “science like art is not neutral as regards human values; it requires honesty, tolerance and freedom”.

Echenique pointed out that Aalto University is named after a famous architect, Alvar Aalto, and stressed that “science, at its frontiers, is not a technical thing, but is rather architecture. An architect needs to understand and use extensive technical knowledge but this is not the essence of architecture. What we appreciate in architecture and art is that they open our eyes to new possibilities, and that is precisely what the best science does. This is the style of science at Aalto and that’s why I, and many others, admire the work of Aalto immensely”. He added that “the values that Aalto is fighting for are the same that we are aiming to develop at the DIPC and the University of the Basque Country (UPV/EHU): passion for knowledge, freedom to be creative and critical, courage in the pursuit of excellence, integrity, openness and equality, and accountability for our actions”.