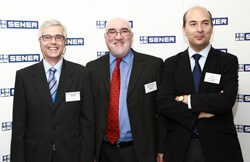 The opening ceremony, held at the beginning of this month, was attended by local authorities.

The opening ceremony was attended by local authorities. Basque technology group Sener  has officially opened its facilities in the British city of Manchester, where the company has had an engineering and construction division operating since 2014.

The opening ceremony, held at the beginning of this month, was attended by local authorities, headed by the Mayor of Manchester, Ian Stewart. The company uses the Manchester facilities as its operational base to provide service to outstanding projects, such as the construction of two Queen Elizabeth class aircraft carriers for the British Royal Navy, engineered using the Basque group’s proprietary software.

Sener also performs projects in the aerospace sector, where it is a renowned international player and works as a supplier to British companies in the market. The Basque group is also working to achieve contracts in the fields of energy, infrastructure and transportation. In this latter sector it has established cooperation with technological institutes, such as the HR Wallingford research centre, with which it is working on the construction of an industrial port in Morocco.